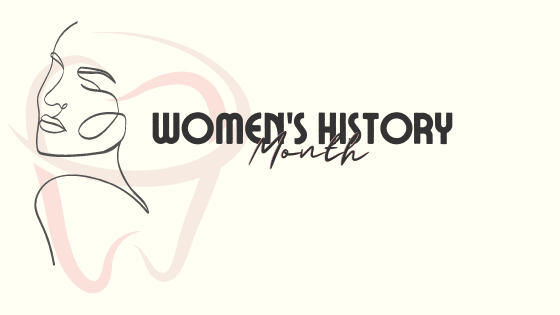 March is filled with so many special days that we often celebrate or engage with. St. Patrick’s Day, daylight savings, the first day of Spring, Pi Day, but did you know that March is also Women’s History Month? Women’s history month is a celebration of the role of women in American history, so let’s dive in together!

The origin of women’s history month as a national celebration started in 1981 when Congress passed Public Law 97-28, designating the week beginning of March 7th, 1982, as “Women’s History Week”. Between the years of 1988 – 1994, Congress passed resolutions requesting and authorizing the President to declare March of every year to be known as “Women’s History Month”, and it worked. Since 1995, Presidents have been issuing proclamations declaring March as women’s history month which celebrates the contributions and achievements women have made to the United States.

So, with no further ado, we bring you the trailblazing women of dentistry!

Born Lucy Beaman Hobbs on March 14th, 1833, in Constable, New York, in 1859, Hobbs moved to Ohio to pursue a degree in dentistry. She was denied admission at the Eclectic Medical College and the Ohio College of Dentistry in Cincinnati because she was a woman. A recent graduate of one of the schools, Dr. Samuel Wardle, agreed to tutor Hobbs in an apprenticeship at his new office. Later, she opened her own practice in 1861. Hobbs moved her practice to northern Iowa in 1862 and became a member of the Iowa State Dental Society and served as a delegate to the American Dental Association Convention of 1865. Mainly, because Hobbs gained trust through her practice, the school finally changed its attitude towards admitting women. She was finally allowed to enroll as a senior at the Ohio College of Dentistry. This was only the second dental school in the nation at the time. In 1866, she became the first woman to receive a doctorate in dentistry. After a while, she moved her practice once more, this time to Chicago where she married Civil War veteran James Myrtle Taylor. Dr. Hobbs then began to teach him dentistry. Together, they created one of the most successful dental practices in Kansas.

In 1886, her husband died. A year later, she retired and started to devote her time to charity and other social causes especially ones for women’s rights. Today, the American Association of Women Dentists recognizes outstanding women in the dental field with the Lucy Hobbs Taylor Award. Which is one of the most prestigious honors the organization grants. Hobbs was the first woman dentist in the United States to receive her doctorate, paving the way for Emeline Roberts Jones to be the first practicing woman dentist.

Emeline Jones was born in 1838 with dreams of wanting to become a dentist. At 18, she married a dentist, Dr. Daniel Jones. He was quite reluctant to teach her, as he believed that women were not suited for dentistry because of their “frail and clumsy fingers”. Emeline persisted anyway and started to secretly practice doing fillings and extractions on teeth, and she was successful at it too. In 1855, it was only after she was working on hundreds of teeth and demonstrating her skills in secret that her husband finally took her seriously and allowed her to work on some of his patients. In 1859, she became his partner and became publicly known as a skilled dentist.

After her husband died in 1864, Jones had two small children and herself to support, so she continued her practice alone to support her family by traveling with her portable dentist chair to eastern Connecticut and Rhode Island. In 1876, she moved to New Haven, Connecticut where she established her own successful practice that she maintained until her retirement in 1915. Emeline Jones was nationally recognized as the first woman dentist at the 1893 World’s Columbian Dental Congress and in that same year, she became the 18th dentist to be licensed in Connecticut.

Women’s History Month is a celebration of women’s contributions to history, society, and cultures. Every year, the National Women’s History Alliance chooses a theme for the month and this year’s theme is “Women Providing Healing, Promoting Hope”. This theme works very well because where would we be without dentists? Women dentists? Lucy Hobbs and Emeline Jones provided both healing and hope, and we recognize them for their contributions and achievements this month. Remember oral health impacts your total health. Schedule your spring dental cleaning today!